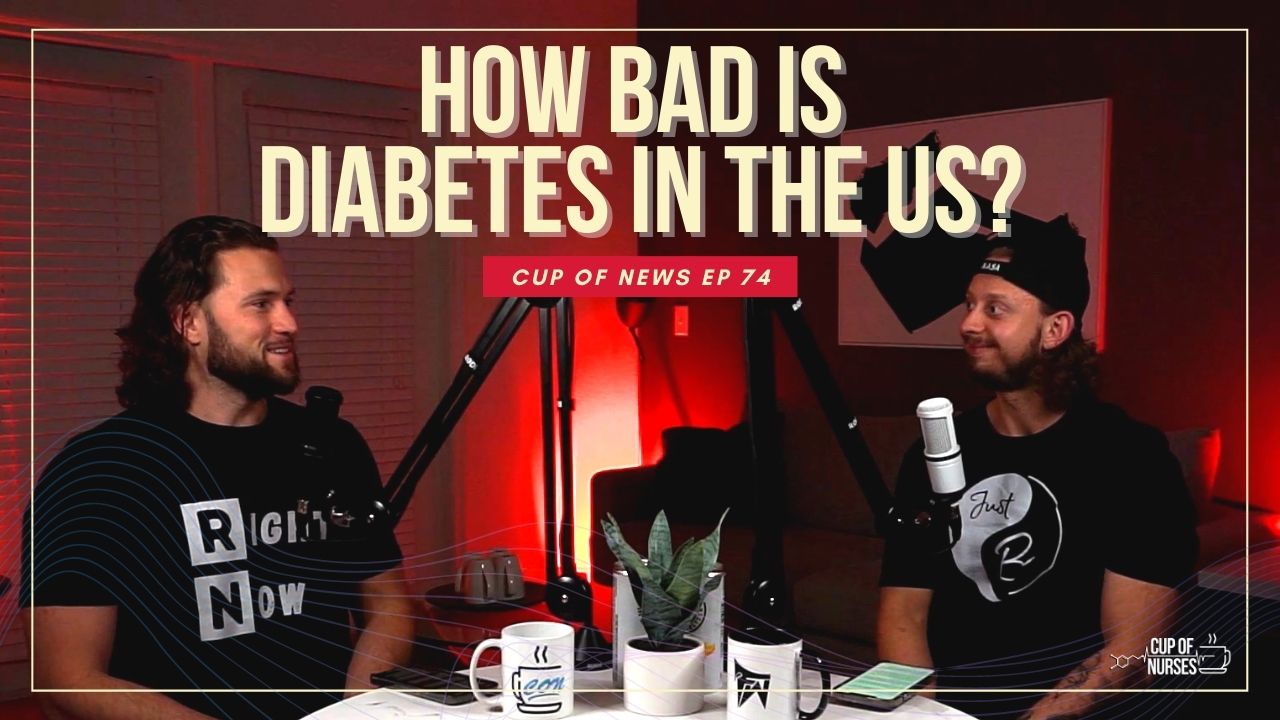 CON EP 74: The Effects of Diabetes on Your Body

November is National Diabetes Month and to bring awareness to it we’d like to teach you all about the effects of diabetes, from prevention to how it impacts a person on the cellular level in this episode.

Diabetes is a chronic condition in which the body has a problem with turning food into energy.

When you eat food majority of it, for example, carbs, get broken down into something called glucose. Glucose is then used by the body for energy.

When your body senses an increase in glucose in the blood it notifies the pancreas to produce a hormone called insulin. Insulin then allows your body’s cells to use glucose.

Without insulin your body would not be able to use glucose, it is like insulin is the key to the door to let glucose into the cell.

When you have diabetes your body either doesn’t make enough insulin to counter the glucose or can’t use insulin properly. During this disruption blood sugar stays elevated causing chronic inflammation and leading to other problems like heart disease, eye damage, kidney impairment.

Currently, there is no cure for diabetes but there are ways to prevent it. Some people are also born with diabetes.

Diabetes is a chronic disease requiring medication and lifestyle changes, however, when managed properly the life of a person with diabetes is minimally changed.

In 2020, 34.2 million people have diabetes. With this, 26.9 million have been diagnosed while 7.3 million others have undiagnosed diabetes [1]. This shows that the effects of diabetes affect millions of people.

In the same year, 88 million people or 30% of the US population aged 18 years old or older were reported to have pre-diabetes.

It has been hypothesized that the prevalence of diabetes will increase by 54% between the years 2015 and 2030. That’s around 54.9 million Americans suffering from this disease.

There are a few different types of diabetes, type 1, type 2, and gestational diabetes. All are dangerous in their own way and can lead to other health-related problems and even death.

Type 1 diabetes can affect anyone and it can even start from birth. In type 1 diabetes the pancreas does not produce insulin. The person with type 1 diabetes is going to be insulin-dependent because without it cells cannot absorb glucose.

In type 2 diabetes either the pancreas cannot produce enough insulin or your body cannot use the insulin properly. Certain people that fall under this category of diabetes can manage their blood sugar with diet and exercise while other people may need medication or even insulin.

Gestational diabetes is a little different than the prior types. This diabetes affects pregnant women. We are still unsure what causes gestational diabetes but it doesn’t guarantee that the woman will have diabetes after the birth of the baby. Researchers hypothesis that since there are so many hormones at play during pregnancy that sometimes the mother can get insulin resistance while the child develops inside.

Prediabetes is a condition of elevated blood sugars but the blood sugar levels are not high enough to be considered in the diabetic range. This is a warning sign, if you don’t start incorporating better lifestyle habits you may become diabetic.

Long-term complications of diabetes are associated with a chronic inflammatory state. This causes prolonged damage to the blood vessels and organs, the ones that are affected the most are the heart, brain, eyes, and kidneys.

Over time, high blood sugar can damage blood vessels and the nerves that control your heart. People with diabetes are also more likely to have other conditions that raise the risk for heart disease

The most common form of heart disease is coronary artery disease. It develops over time as the vessels fill with plaque. Atherosclerosis occurs causing a narrowing of arteries reducing oxygen to the heart causing a weakening and straining of the heart muscle leading to heart attacks and strokes [4].

Diabetes complication that affects the eyes. It causes progressive damage to the retina, the light-sensitive lining at the back of the eye.

Diabetic retinopathy occurs when the tiny blood vessels in the eye leak blood and fluids causing the retinal tissue to swell causing a decrease in vision [5].

Research has shown that there is a link between diabetes and dementia. They don’t have an exact rationale behind it but many things it has to do with the heightened levels of inflammation diabetics have.

Even though your brain is responsible for only about 2% of your body’s weight but consumes about 25% of glucose. Some study’s show a reduction of brain volume of people with type 2 diabetes.

Over time diabetes damages blood vessels and nerves. This ultimately affects how your nerves send signals and information.

Depending on the affected nerves, diabetic neuropathy symptoms can range from pain and numbness in your legs and feet to problems with your digestive system, urinary tract, blood vessels, and heart [6].

When our bodies digest the protein we eat, the process creates waste products. In the kidneys, millions of tiny blood vessels (capillaries) with even tinier holes in them act as filters.

Diabetes can damage this system. High levels of blood sugar make the kidneys filter too much blood. All this extra work is hard on the filters. After many years, they start to leak and useful protein is lost in the urine.

In time, the stress of overwork causes the kidneys to lose their filtering ability. Waste products then start to build up in the blood. Finally, the kidneys fail. This failure is called ESRD [7].

Pancreas transplantation was found to improve the life prognosis of patients with type 1 diabetes, especially those with end-stage renal failure waiting for SPK [8].

The surgeon makes an incision down the center of the abdomen. Next, the surgeon places the donor pancreas on the lower right side of the abdomen attached to the nearby blood vessels.

If the pancreas is taken from a deceased donor, then the surgeon removes the pancreas along with a small section of the small intestine.

Whereas, if the pancreas is taken from a living donor, the surgeon takes a portion of the body and the tail of the pancreas.

The surgeon generally connects the new pancreas to your intestines so its digestive juices can drain. The recipient’s existing pancreas usually remains in their body.

To know more about the effects of diabetes, check out the full video of this episode here 👇👇👇