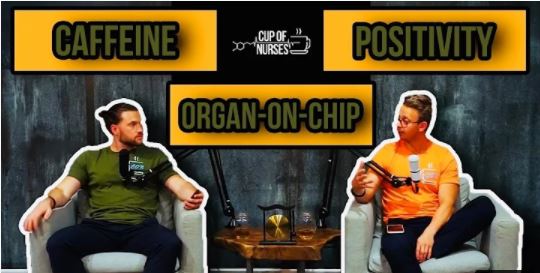 Covid-19 cases are steadily rising in the US and there is an aim for another lockdown. Evidence is showing that a more positive outlook on life and feeling happy in general is being associated with less memory decline.

The benefits of caffeine have been debated for years, most recently caffeine intake is being linked with long-term memory benefits. Organ-on-chip has the potential to transform the way we do research on human cells with the potential of benefiting reperfusion therapy.

Positivity Is Associated With Less Memory Decline: Evidence From a 9-Year Longitudinal Study

A new study finds that people who feel enthusiastic and cheerful — what psychologists call ‘positive affect’ — are less likely to experience memory decline as they age [1]. This result adds to a growing body of research on the positive effect’s role in healthy aging.

Unfortunately, we wish some memorization could last a lifetime, but emotional factors can negatively impact our ability to remember information throughout life.

In each assessment, participants reported on a range of positive emotions they had experienced during the past 30 days. In the final two assessments, participants also completed tests of memory performance. These tests consisted of recalling words immediately after their presentation and again 15 minutes later.

Results revealed that positive affect was associated with less memory decline across 9 years when analyses controlled for age, gender, education, depression, negative affect, and extraversion (state of primarily obtaining gratification from outside oneself.)

What’s interesting is as people get older, they experience fewer negative emotions. Older adults are more emotionally gratifying memory distortion for past choices.

This is a broad statement but the positivity effect in older adults’ memories seems to be due to their greater focus on emotion regulation secondary to cognitive control mechanisms that enhance positive and diminish negative information.

80% of the population consumes some type of caffeine, in the US it’s at about 90%. Caffeine is a natural stimulant most commonly found in tea, coffee, and cacao plants. It works by stimulating the brain and central nervous system, helping you stay alert and prevent the onset of tiredness.

To understand the function of caffeine one has to grasp the concept of another neurotransmitter called adenosine.

Most people initially drink caffeine in the form of a beverage. It’s absorbed in the small intestines within an hour and becomes available throughout the blood and most parts of the body, including your brain. The mean half-life of caffeine is about 5 hrs. As it starts entering your brain, it starts competing with adenosine.

How Adenosine Makes You Feel Sleepy

There are many different receptors in your brain, different ones have different effects. The one we’re interested in is the A1 receptor. Adenosine locks with the A1 receptor, it promotes muscle relaxation and sleepiness, which is why people get tired as the day progresses.

Furthermore, adenosine can bind to the A2A receptor. This binding interferes with the release of mood-improving neurotransmitters, such as dopamine.

Adenosine itself is produced primarily from physical work and intensive brain use. That is why over the course of the day your body accumulates adenosine.

The caffeine in your brain is competing with adenosine and preventing it from binding to A1 receptors. This is why it promotes wakefulness.

Caffeine doesn’t actually lock in with the A1 receptor. It’s more like something that gets in the way and occupies the lock, rather than actually unlocking it.

It similarly gets in the way of the A2A receptor, which can help promote the release of dopamine and glutamate, making you feel good after a cup of coffee.

When you first wake up, your body has metabolized away the adenosine molecules. You’re a bit groggy, but you’re waking up.

Reviving Cells After a Heart Attack

Researchers have unraveled potential mechanisms behind the healing power of extracellular vesicles and demonstrated their capacity to not only revive cells after a heart attack but keep cells functioning while deprived of oxygen during a heart attack [5].

The researchers demonstrated this functionality in human tissue using a heart-on-a-chip with embedded sensors that continuously tracked the contractions of the tissue.

It demonstrated their capacity to not only revive cells after a heart attack but keep cells functioning while deprived of oxygen during a heart attack.

How was this discovered? Researchers used a heart-on-a-chip with embedded sensors that continuously tracked the contractions of the tissue.

The team tested the effect of Endothelial-derived EV’s (EEVs) on human heart tissue using the heart-on-a-chip model. Organ-on-chip platforms mimic the structure and function of native tissue and allow researchers to observe, in real-time, the effects of injuries and treatments in human tissue.

The absence of oxygen and nutrients from blood during the ischemic period creates a condition in which the restoration of circulation results in inflammation and oxidative damage through the induction of oxidative stress rather than (or along with) restoration of normal function.

Findings in the research study

What will be the future of Exosomal cell therapies?