What are Electromagnetic Fields & their Harmful Effects

What are electromagnetic fields?

There are both natural and human-made sources of non-ionizing EMFs. The earth’s magnetic field, which causes the needle on a compass to point North, is one example of an occurring EMF. 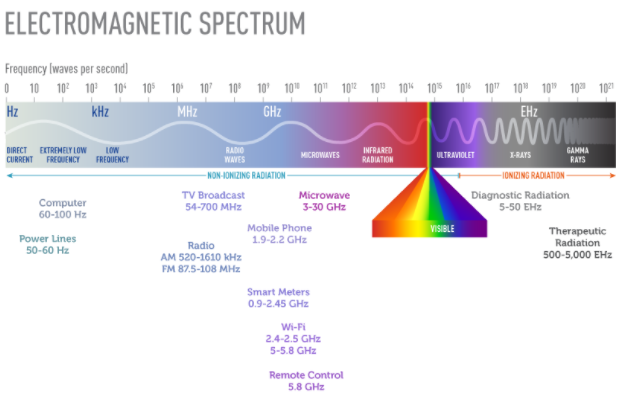 Ionizing radiation can be harmful. It breaks chemical bonds and changes various substances’ molecular and chemical structures. This includes human tissue.
A person is more likely to experience damage if exposed to high radiation levels. Compared to being often exposed for longer periods. It could occur, for example, if a person undergoes many X-rays without protection.
Likewise, patients undergoing cancer treatments lead to damage too. These include burns, hair loss, skin damage, tissue damage, damage to bone marrow, etc.

Most research shows the technical and ethical problems in humans based on two things. The epidemiological research and observation. These discrepancies hamper unbiased evaluation of the consequences of electromagnetic field exposure.
Humans are often subjected to EMF from different situations and sources. But these different sources and frequencies still need studying. Today, there’s no available information related to the result of these exposures.

The link between power line exposure and childhood leukemia

According to cancer.gov, there are several studies about power line exposure. These studies have analyzed the combined data from different sources. The same study suggests that power line exposure has a link to childhood leukemia:
The epidemiological studies measured the background field in the home. This is often in the child’s bedroom. They measured the field away from any domestic appliances on purpose. It is easy to find areas greater than 0.4 µT close to devices. We are interested in homes where the field is more significant than 0.4 µT, even away from appliances.
Similarly, they also measured the field for 24 hours or longer (often 48 hours). Areas vary over time and the field can go above 0.4 µT for short periods in many homes. They are interested in homes where the 24-hour average is above 0.4 µT.

Random facts from the internet potentially link EMFs to diseases.

In August 2009, a paper by Columbia University described how EMFs activate a cellular stress response. EMFs can penetrate a cell’s nucleus and interact with its DNA, bypassing a cell’s defense mechanisms. (5)

How EMFs Cause Oxidative Damage in a Cell:

Another effect of EMF’s interaction with our cells is the increase of calcium ions. Twenty years ago, an EMF exposure study shows that it could change calcium signals in the cell membranes (6).
Electromagnetic fields force the voltage sensors to open the cell membrane gates. This allows a ton of calcium ions, called intracellular Ca2+ and nitric oxide (NO), into the cells. Nitric oxide has beneficial health effects, like stimulating bone growth and increasing calcium.
But too much of it will make it react with superoxide to form peroxynitrite. This is a potent non-radical oxidant. It breaks down to form many different free radicals. In return, it damages cells and leads to many chronic diseases.
No correlation but Autism is also connected with excessive amounts of intercellular calcium.

What are the current guidelines for EMFs?

There’s a disagreement in the scientific literature. It is over whether electromagnetic fields pose a danger to human health and, if so, how much.
The International Agency for Research on Cancer IARC evaluation from 2011 pointed to a possible link. This link is between R.F. radiation and cancer in people, particularly glioma, a malignant type of brain cancer.
This conclusion means that there could be some risk. Likewise, the report emphasized that the link between cellphone use and cancer risk must be monitored by the scientific community. It said more research is needed into the long-term, heavy use of mobile phones.

These recommendations are for continued long-term exposure for many hours and days, not brief exposures like driving under power lines.

Standards from The International Commission on Non-Ionizing Radiation Program  ICNIRP allow 830 mG exposure to the public.

How can you protect yourself?

If it is below 5V/m most of the time, and you don’t live near any T.V. or radio towers, then you should have low EMF exposure. Some other researchers recommend 10-20 V/m max in homes and offices and 5 V/m max for sleeping areas.

The 1996 FCC standards did not address the full scope of radiation dangers from our electronic devices. It wasn’t enough back in 1996 or 2011. With all the technological advances since then, we have reached far beyond the appropriate revision point.
On August 13, 2021, the U.S. Court of Appeals for the D.C. Circuit ruled against the FCC and favored Children’s Health Defense (CHD). In a two-to-one panel decision, one called for the FCC to reevaluate its wireless radiation exposure standards.

Why Are The FCC Standards Inadequate?