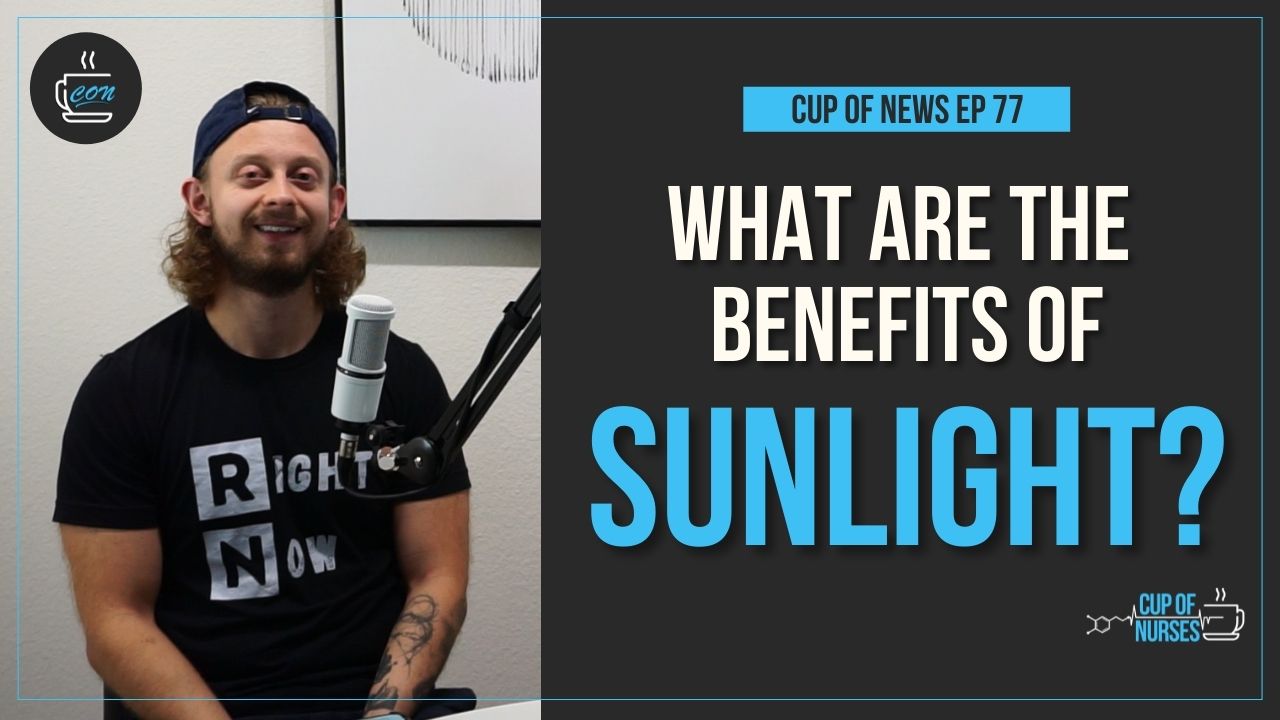 Importance of Sunlight and the Negative Effects of Artificial Light

The importance of sunlight plays a crucial part in human health and well-being. Among the benefits associated with sunlight are Vitamin D production, promoting sleep, and bone formation. It also helps with depression and anxiety.
Artificial light is something that has become a growing concern. Light from our phones, lamps, and TVs also has an impact on us. Some research has been showing blue light in particular has a harmful effect on the eyes and brain.

Benefits and Importance of Sunlight

There are many benefits of sunlight that your body can use. The main ones are vitamin D production which promotes sleep, helps with bone formation, and treats anxiety, and depression.

We can all say getting your skin hit by the sun is a simple pleasure we’ve all experienced. It’s interesting to note that almost all animals on this planet need sunlight.

Vitamin D is a little different than the rest of the fat-soluble vitamins. Unlike the other four vitamins, Vitamin D is actually produced in the body. It is also available in small amounts in egg yolks and fish. But for it to be useful, it is first converted by the body. Sunlight’s ultraviolet B energy converts the precursor to Vitamin D3 in the body [1].

Fun fact: Vitamin D is one of the oldest hormones. It was the earliest life form for over 750 million years. Plants and animals that are often exposed to sunlight have the capacity to produce vitamin D.

It is why this is critically important for the development, growth, and maintenance of a healthy skeleton from birth until death. The major function of vitamin D is to maintain calcium homeostasis [2].

It accomplishes this by increasing the efficiency of the intestine to absorb dietary calcium. 1,25(OH)2D receptors (VDR) are present not only in the intestine and bone.

However, it is also found in a wide variety of other tissues, including the brain, heart, stomach, pancreas, activated T and B lymphocytes, skin, gonads, etc. 1,25(OH)2D is one of the most potent substances to inhibit proliferation of both normal and hyperproliferative cells and induce them to mature.

Once light enters the eye, it is then sensed by a particular group of cells on the retina. It is then carried to the brain and interpreted as information about the time of the day. The brain will then send signals throughout the body. This is to control organs and systems according to that time of day.
Natural sunlight affects your circadian rhythm. Sunlight regulates the circadian rhythm. It helps the body know when to decrease or increase melatonin levels. During the day, daylight lessens your melatonin. At night when there is no sunlight, melatonin is higher. It also prepares your body for sleep. It is also why you feel tired once the sun goes down.

Another importance of sunlight is bone formation. Vitamin D allows your body to absorb calcium. Calcium is necessary for building strong, healthy bones. Without these, bones cannot form in childhood. It can also lose mass, becomes weak, and breaks during adulthood. Even if you get enough calcium in your diet, your body will not absorb that calcium if you don’t get enough vitamin D:

One study looked at the importance of sunlight in the production of Vitamin D on bone, muscle, and cartilage health. The study looked at all the receptors that are associated with vitamin d and the connection to certain vitamin D  deficient diseases. It concluded

“Understanding the relative contributions of direct and indirect actions of vitamin D on bone is complex. The cells in bone and cartilage contributing to skeletal formation and maintenance have both VDR and CYP27B1 and respond directly to both circulating 25OHD and 1,25(OH)2D (circulating and endogenously produced).”

Defining the optimal level of vitamin D to maintain bone health remains under debate. But achieving a level of 25OHD around 30 ng/mL is both safe and effective. Additional research will be necessary to determine whether this is the optimal level,” [3].

The second study said, “Vitamin D is a secosteroid hormone essential for calcium absorption and bone mineralization which is positively associated with bone mineral density [BMD]. It is well-established that prolonged and severe vitamin D deficiency leads to rickets in children and osteomalacia in adults.” [4].

The importance of sunlight and darkness triggers the release of hormones in your brain. Exposure to sunlight is thought to increase the brain’s release of a hormone called serotonin. Serotonin is associated with boosting mood and helping a person feel calm and focused.

When sunlight enters your eyes, it stimulates the parts of your retina that then cue your brain to produce serotonin. Serotonin appears to play a role in regulating mood, emotions, appetite, and digestion. The body uses serotonin to send messages between nerve cells, but it cannot cross the blood-brain barrier, which means that the brain has to produce any serotonin it needs to use [5].

Scientists don’t know exactly what causes depression, but one theory is that it’s due to an imbalance of neurotransmitters, like serotonin, in the body.

Analyzed global daily reports of fatalities and recoveries from 239 locations from 22nd Jan 2020 to 9th April 2020. This is a previous study we mentioned from Cup of news EP 10.

We present historical evidence that vitamin D supplementation prevented past respiratory virus pandemics. There is a discussion on how molecular mechanisms of vitamin D action can prevent respiratory viral infections and protect against ARDS. In the study, they highlight vitamin D’s direct effect on the renin-angiotensin-system (RAS), which in concert with additional effects, can modify host responses thus preventing a cytokine storm and SARS-CoV-2-induced pathological changes.

Unfortunately, about 42% of the US population is vitamin D deficient with some populations having even higher levels of deficiency, including premenopausal women, those with poor nutrition habits, people over age 65, and Caucasians who avoid even minimal sun exposure, and those who take prescription medication long term.

Our bodies are evolved to the rhythms of the natural light-dark cycle day and night. The spread of artificial lighting means most people never experience truly dark nights anymore, which can cause problems with sleep patterns as humans’ circadian rhythm regulates core functions such as sleeping or waking up on an internal clock that depends upon darkness for validating information received through our eyes—such us noticing whether it’s daytime by judging how much brighter things appear than during “nighttime”.

Exposure to blue light at night is particularly harmful. Unfortunately, most LEDs used for outdoor lighting — as well as computer screens, TVs, and other electronic displays — create abundant blue light.

Nighttime exposure to blue light is particularly harmful [6]. LEDs used for outdoor lighting, computer screens, and TVs all emit a lot of that troublesome color which makes it hard for your body’s sight receptors to adjust accordingly- this causes insomnia as well as issues with hormonal regulation!

Blue light may also damage your retinas. That’s called phototoxicity. The amount of damage depends on wavelength and exposure time. Animal studies show even short exposure (a few minutes to several hours) may be harmful. A filter that cuts 94% of blue light has been shown to lessen the damage.

There’s evidence blue light could lead to permanent vision changes. Almost all blue light passes straight through to the back of your retina. Some research has shown blue light may increase the risk of macular degeneration, a disease of the retina.

Research shows blue light exposure may lead to age-related macular degeneration or AMD. One study found blue light triggered the release of toxic molecules in photoreceptor cells. This causes damage that may lead to AMD.

Screen time, especially at night, is linked to poor sleep. The blue light from electronic devices messes with your circadian rhythm or sleep cycle. It signals your brain to wake up when it should be winding down. In one study, as little as 2 hours of exposure to blue light at night slowed or stopped the release of the sleep hormone melatonin [7]. Powering down your digital devices at least 3 hours before bedtime can help.

Blue light exposure might raise your risk for certain cancers. One study found that people who work the night shift are at greater risk for breast, prostate, and colorectal cancers.

Nighttime exposure to blue light was linked to depressive symptoms in animal studies [9]. But exposure to blue light during the day may have the opposite effect. It’s been used to treat a seasonal affective disorder or SAD. That’s a form of depression related to the changing of the seasons. Research shows 20 minutes of blue light exposure in the morning helps ease SAD symptoms.