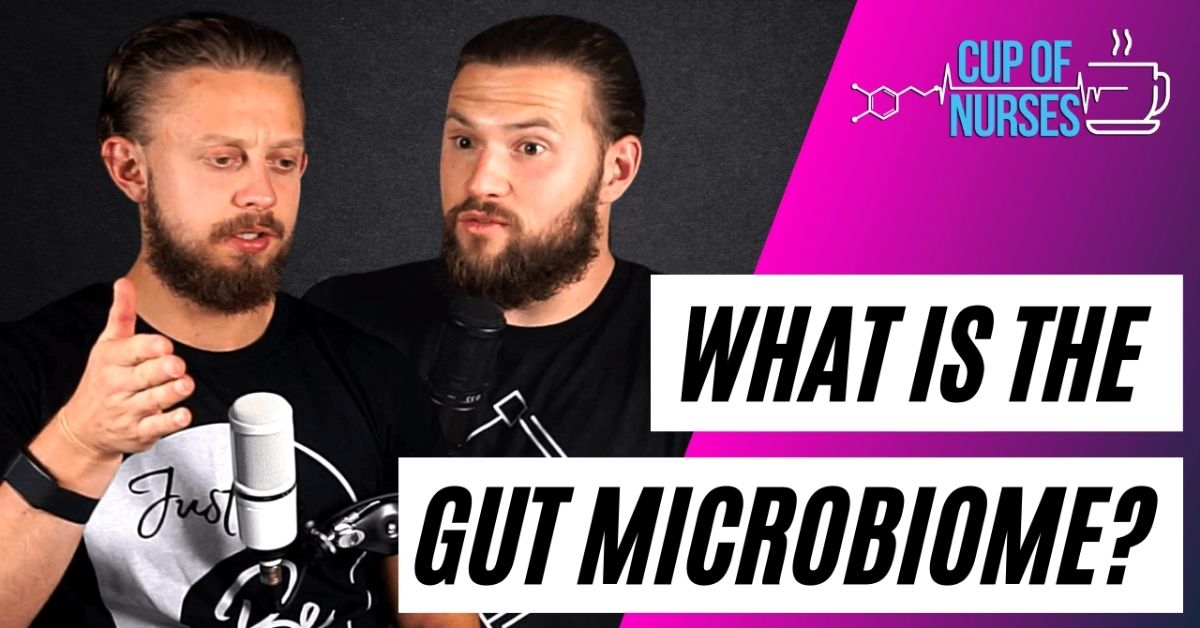 In this episode, we are going to talk about the importance of the gut biome. There is current research going on about our gut health, specifically what grows in our gut. For many years we have overlooked the importance of our gut microbiome and the negative effects of dysbiosis.

The majority of our immune system is housed in our gut so it makes sense to look at the place that is introduced to foreign objects because it is responsible for the breakdown of food and anything else that enters the mouth. Our gut is what keeps us alive, the microorganisms living in you are the ones that are keeping you alive and functioning.

Therefore, a person’s stomach or intestinal distress can be the cause or the product of anxiety, stress, or depression. That’s because the brain and the gastrointestinal (GI) system are intimately connected.

Given how closely the gut and brain interact, it becomes easier to understand why you might feel nauseated before giving a presentation or feel intestinal pain during times of stress. That doesn’t mean, however, that functional gastrointestinal conditions are imagined or “all in your head.”

Psychology combines with physical factors to cause pain and other bowel symptoms. Psychosocial factors influence the actual physiology of the gut biome, as well as symptoms. In other words, stress (or depression or other psychological factors) can affect movement and contractions of the GI tract [1].

What is the Gut Microbiome

We humans consist of 100 trillion microbes. Microbes outnumber our human cells 10 to 1. The majority of those microbes live in our gut.

The microbiome may weigh as much as five pounds.” The bacteria in the gut:

Why is the Gut Microbiome Important

The microbiome is essential for human development, immunity, and nutrition. The bacteria living in and on us are not invaders but beneficial colonizers. Autoimmune diseases such as diabetes, rheumatoid arthritis, muscular dystrophy, multiple sclerosis, and fibromyalgia are associated with dysfunction in the microbiome.

Disease-causing microbes accumulate over time, changing gene activity and metabolic processes and resulting in an abnormal immune response against substances and tissues normally present in the body.

Autoimmune diseases appear to be passed in families not by DNA inheritance but by inheriting the family’s microbiome.

Things You Didn’t Know About Your Gut

The gut is one of the most underrated parts of our body. And sometimes, we forget that it is even there. However, you will be surprised to know that the gut has one of the most important jobs in the body. Here are some facts you need to know about it [3].

How The Microbiota Benefit The Body

Microbiota stimulates the immune system, breaks down potentially toxic food compounds, and synthesizes certain vitamins and amino acids. Fast digest carbohydrates such as sugar and lactose are absorbed quickly in the small intestine. Foods with higher fiber travel down to the large intestine.

The microbiota in the large intestine help breaks down these compounds with their digestive enzymes. The fermentation of indigestible fibers and resistant starches causes the production of short-chain fatty acids (SCFA) that can be used by the body as a nutrient source.

It also plays an important role in muscle function and possibly the prevention of chronic diseases, including certain cancers and bowel disorders. SCFAs also is speculated to play a key role in neuro-Immuno endocrine regulation, the hypothalamic-pituitary-adrenal axis.

Clinical studies have shown that SCFA may be useful in the treatment of ulcerative colitis, Crohn’s disease, and antibiotic-associated diarrhea.

Dr. Kirsten Tillisch, professor of medicine at the David Geffen School of Medicine at the University of California, Los Angeles, led a study in 2013 that was the first to show eating a bacteria-friendly, or probiotic, food – in this case, yogurt – affected regions in the brain associated with the processing of emotion and sensation in healthy women with no psychiatric symptoms. Four years later, her team linked specific gut bacterial profiles to brain differences in those regions.

Those bacteria interact with the brain and other organs in three ways. First, the gut and brain communicate by molecules carried in the blood, and microbes influence those chemical messages.

Finally, the immune system of the gut wall and the body’s other immune components respond to gut microbes, affecting the brain and organs.

Here’s one example of how it all ties together. You might have heard of serotonin and dopamine, neurotransmitter molecules that steer mood and behavior in brain circuits. These molecules also are found in the gut. In fact, Stevens said, most of the body’s serotonin comes from the gut wall.

Gut bacteria also use them to signal the gut’s nervous system and its direct link to the brain. The bacterial messages also can prompt responses from the body’s immune system.

Summed up: “Your gut, your brain, and your immune system interact,” Stevens said. “The triangulation of those things controls much of your other physiology, whether its blood pressure, metabolism or mood.” [4]

The SCFAs acetate, propionate, and butyrate are the main metabolites produced in the colon by bacterial fermentation of dietary fibers and resistant starch.

The hypothesis is supported by studies in animals and humans showing that gut microbiota dysbiosis has been implicated in behavioral and neurologic pathologies, such as depression, Alzheimer’s (AD) and Parkinson’s (PD) diseases, and autism spectrum disorder (ASD). 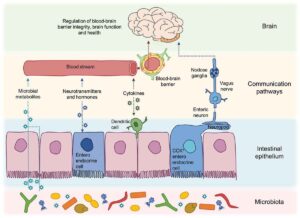 The brain-to-gut signaling can directly affect the microbiota, either via the immune system or gut functions such as motility, the release of neurotransmitters, and intestinal immune tone. Bidirectional gut-brain neural relays control satiety signaling and appetite regulation.

There is growing evidence that shows alterations in the maternal microbiome during pregnancy, such as the use of antibiotics or probiotic variations in diet, immune activation, and exposure to stress can modulate the microbiome, neurodevelopment, and behavior of offspring in both rodents and humans.

It is now widely known that peripheral insults that cause a systemic inflammatory response might affect ongoing inflammation in the CNS mainly by microglial activation (neurotransmitter inflammation), production of inflammatory molecules, as well as recruitment of immune cells into the brain. This is why shaping cerebral inflammation that may seriously affect neuronal function.

Inflammation also affects gut pathologies with increased permeability of the intestine barrier due to decreased expression of tight junction proteins. This opens the pathway to translocations of bacterial products which will cause the immune system to fight off pathogens causing the production of cytokines and impacting the blood-brain barrier [5].

Many studies talk about how the microbiota may contribute to the progression of neurodegenerative diseases and dementia. Neurodegenerative diseases such as Alzheimer’s disease, vascular dementia, and Parkinson’s disease. Symptoms include a deterioration in memory, thinking, behavior, and the ability to perform daily activities.  A commonality amongst dementia is chronic neuroinflammation, involving overactivation and dysregulation of microglia, immune macrophage cells of the brain.

What is the Function of the Microglial Cells?

Microglial cells are a specialized population of macrophages that are found in the central nervous system (CNS). They remove damaged neurons and infections and are important for maintaining the health of the CNS.

When Microglial cells are activated their morphology changes secondary to increased secretion of proinflammatory cytokine. The release of reactive oxygen and nitrogen species can lead to neuronal cell death, loss of the Blood-brain barrier (BBB), and brain damage. There are consistent findings supporting the role for the gut microbiota in the pathogenesis of neuroinflammation in this mouse model, antibiotic administration also limits β-amyloid pathology and neuroinflammation.

The BBB is now considered to be part of a neurovascular unit comprising brain microvascular endothelial cells, pericytes, astrocytes, neurons, microglia, and extracellular matrix, which together contribute to regulating BBB stability and function [6].

The imbalance in the Neurovascular unit starts with disease states from trauma or infections which causes a disruption of endothelial tight junction leading to the translocation of blood-borne immune cells. It also results in inflammatory mediators such as cytokines, and microbes with their products that activate microglia, resulting in inflammation and ultimately cell dysfunction and death.

These microbial-derived metabolites and dietary components have essential metabolic and signaling functions which can modulate host homeostasis, including BBB integrity and brain function.

Imagine manipulating microbes to resist disease and respond better to treatments. We are at the beginning of differentiating in the microbiome between healthy individuals and those with chronic diseases such as diabetes, gastrointestinal diseases, obesity, cancers, and cardiovascular disease.

In the name of science, we are putting our guts to the test. We are going to do the Viome’s Health and Gut Intelligence Tests. Viome offers information relating to Health and food insights, supplement, prebiotic, & probiotic recommendations to support:

It can give you a potential answer to these questions:

To watch the full episode and learn more about the gut biome, click here