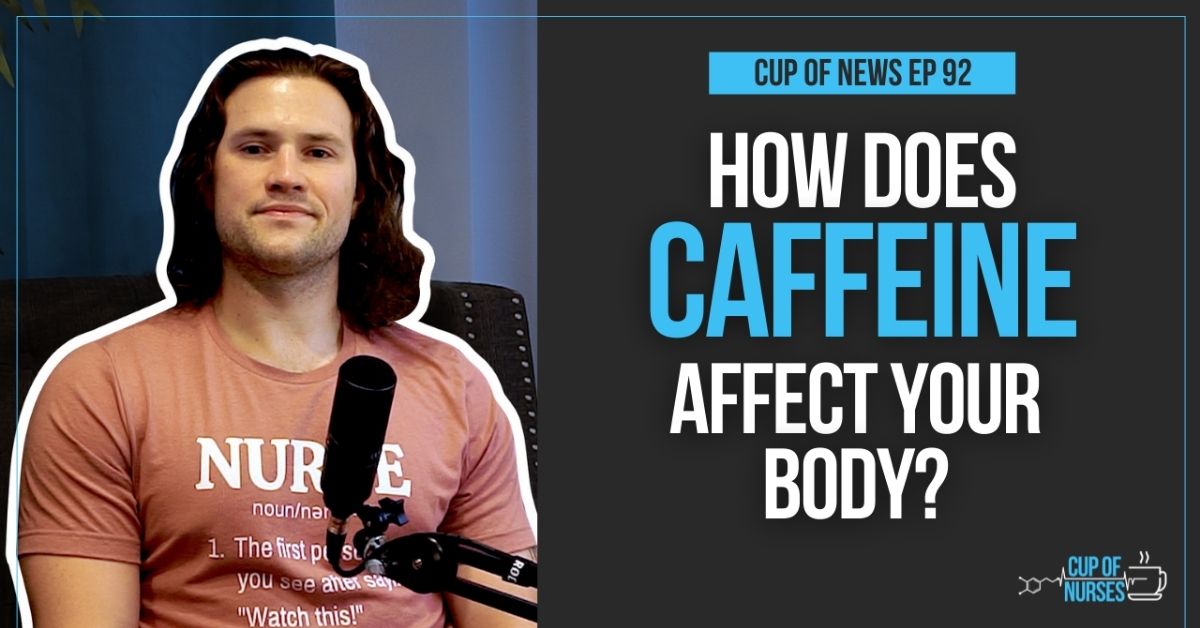 How Does Caffeine Affect Your Body?

Can caffeine affect your body? The short answer is yes. In this episode and honor of Caffeine Awareness month, we will discuss how caffeine affects your body and is effects after consuming it for a long time.

Most Americans use caffeine daily but don’t even know what it is or what caffeine exactly does. About 85% of people in the US consume at least one caffeine beverage/per day [1].

What is Caffeine, and Can Caffeine Affect Your Body?

When someone says caffeine, we immediately think of coffee. And while coffee has caffeine, it’s not it. Caffeine is a bitter-tasting, white, and odorless powder. It is naturally found in the fruit, leaves, and beans of coffee, cacao, and guarana plants. The truth is that caffeine is added to almost all kinds of food and drinks.

So, the next time you wonder why you are addicted to caffeine, it’s because of its psychoactive properties.

How Caffeine Acts in the Body

The way caffeine works are thought to be mediated by several mechanisms:

The most common one is that it blocks the action of adenosine on its receptors and prevents the drowsiness associated with it.

When a person is awake and alert, small amounts of adenosine are present in CNS. Over time, adenosine accumulates in the neuronal synapse by being constantly awake.

Once adenosine increases, it binds and activates the receptors found on specific CNS neurons.

When activated, the adenosine receptors produce a cellular response that increases drowsiness.

What Happens to Adenosine?

Due to the blocking of adenosine inhibitory effects through its receptors, caffeine indirectly affects the release of the following [4]:

Phosphodiesterase inhibition prevents the ability to break down cAMP and cGMP. The levels inside the cell increase, therefore, leading to a decrease in calcium levels in the cell. It leads to vasodilation and smooth muscle relaxation [5].

Caffeine is a vasoconstrictor and works mainly in your heart and brain. However, it vasodilates your peripheral and bronchial vessels as well.

Caffeine affect the body by taking calcium from the bone and introducing it into the bloodstream. Most studies show that this amount is not substantial enough to cause osteoporosis, and the calcium loss can be replaced by adding some milk.

Studies show that caffeine has weak antagonistic properties at the benzodiazepine receptor sites. The reaction, however, can be due to adenosine suppression [6].

The parasympathetic nervous system (PNS) controls homeostasis. The PNS maintains the body at rest and is responsible for the “rest and digest” functions.

Similarly, the sympathetic nervous system (SNS) controls the body’s responses to a perceived threat and is responsible for the “fight or flight” response.

Effects of Caffeine on the Body

Caffeine’s direct effects on the body are due to the inactivation of adenosine receptors. It leads to greater stimulation of the SNS, causing various effects. Here are the most common effects of caffeine on the body:

The FDA has cited 400 milligrams a day for healthy adults—about four or five cups of coffee—as an amount not generally associated with complications.

To watch the full Episode 92, click here for more 👇

0:00 Intro
0:50 Plugs
2:16 Episode Intro
6:07 The only unregulated psychoactive drug
10:19 How Caffeine Acts in the Body
10:25 Adenosine Antagonist
13:03 Caffeine decreases cerebral blood flow
15:39 Inhibition of Phosphodiesterase
16:29 Releases Calcium from Intracellular Storages
18:52 Benzodiazepine Receptor Antagonist
23:13 A possible reason why you are irritable
25:00 Effects of Caffeine
25:10 Increase in alertness
29:18 Tips on setting your body clock
33:07 Estimating time when to take caffeine
39:32 Frequent urination
39:58 Too much caffeine can cause diarrhea
40:41 Decreased suicide risk
46:33 Caffeine as medicine