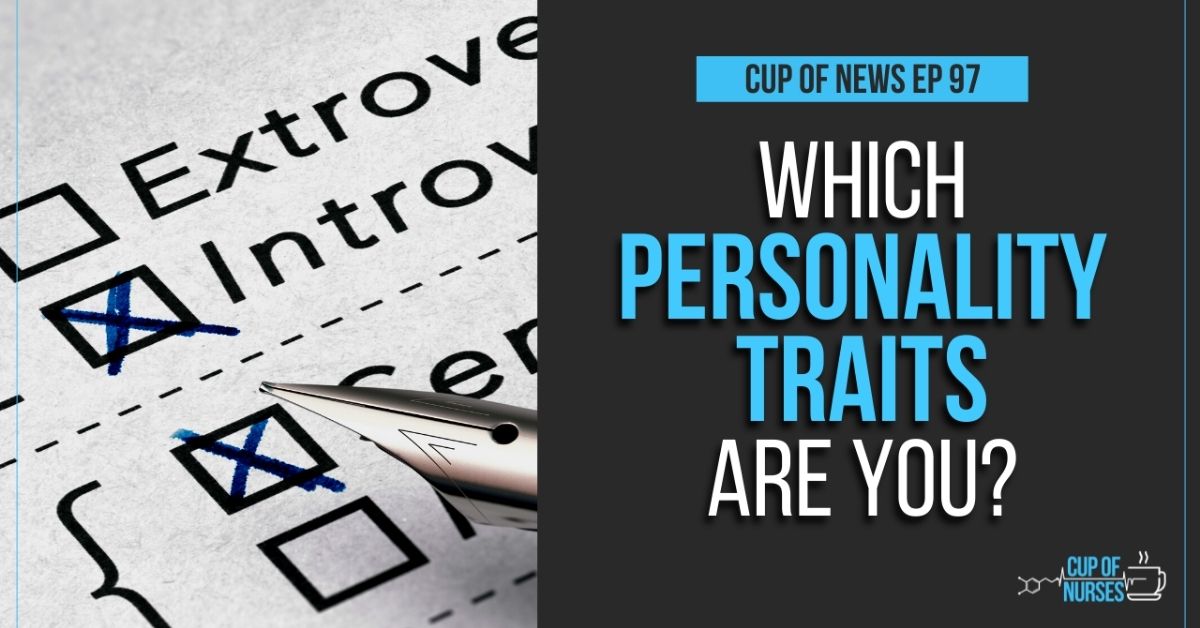 There are five personality traits that we all have in common. Even though every one of us is different, ranging from our personality to our physical appearance, psychologists and psychoanalysts have been trying to predict behaviors and thought processes.

Look at the friends around you. Do you share any personality traits with them? When you think about it, we are not entirely nonidentical. Even though drastically different from one another, humans do have many similarities. On the physical level, when it comes to body type, the majority, if not all, fit into three main body types:

Each body type has its strengths and weaknesses. In the same way, there are general body types. We all share certain personality traits, for example, agreeableness. We are all agreeable but to a certain point. Some might be very agreeable and are ready to say yes, while others are less agreeable and will need some convincing to take your side.

It’s suggested that as early as the late 19th-century, social psychologists were trying to gain a more scientific understanding of personality. However, it wasn’t until the first official study in the 1930s by Gordon Allport and Henry Odbert that personality had some scientific acknowledgment [1].

There was a hiatus from the late 1960s to the 1970s; the changing zeitgeist made publishing personality research difficult. In his 1968 book Personality and Assessment, Walter Mischel asserted that personality instruments could not predict behavior with a correlation of more than 0.3.

Social psychologists like Mischel argued that attitudes and behavior were not stable but varied with the situation. Indication of behavior from personality instruments claimed to be impossible.

The Paradigm of the Five Personality Traits

The paradigm shifted back to accepting the five-factor model in the early 1980s. During a 1980 symposium in Honolulu, four prominent researchers, Lewis Goldberg, Naomi Takemoto-Chock, Andrew Comrey, and John M. Digman, reviewed the available personality instruments of the day. This event was followed by widespread acceptance of the five-factor model among personality researchers during the 1980s.

Emerging methodologies increasingly confirmed personality theories during the 1980s. Though generally failing to predict single instances of behavior. Researchers found that they could predict behavior patterns by aggregating large numbers of observations. As a result, correlations between personality and behavior increased substantially, and it was clear that “personality” did exist.

Personality and social psychologists now generally agree that personal and situational variables are needed to account for human behavior.

In 2007, Colin G. DeYoung, Lena C. Quilty, and Jordan B. Peterson concluded that the ten aspects of the Big Five might have distinct biological substrates.

The FFM-associated (five factors model of personality) test was used by Cambridge Analytica and was part of the “psychographic profiling” controversy during the 2016 US presidential election.

Although a person’s personality and behavior are hard to predict, there are specific tools that we can use that can provide insights into it. These tools help us understand others and ourselves better.

The five personality traits are broad, but they will give us a good general understanding of how people behave [2]. So, what are these traits?

By openness, it means open to experiencing a general appreciation for art, adventure, unusual ideas, imagination, curiosity, emotion, and various experiences. People who are available to new experiences are often intellectually curious, sensitive to beauty, open to feelings, and willing to try new things.

These individuals are known to be creative and aware of their emotions. They are also most likely to have unconventional beliefs. And because they are open to these new things, they are often unpredictable. They also lack the focus they need sometimes and are most likely to engage in behaviors that are against the norms.

The Risk-taker Among Five Personality Traits

Very open people often pursue self-actualization by seeking out euphoric experiences. Conversely, those with low openness seek to gain fulfillment through perseverance and are characterized as pragmatic and data-driven, maybe even close-minded and dogmatic.

*Some disagreement remains about interpreting and contextualizing the openness factor as there is a lack of biological support for this particular trait. Openness has not shown a significant association with any brain regions as opposed to the other four attributes, which did when using brain imaging to detect changes in volume associated with each trait.*

Creativity also plays a big part in the openness trait; this leads to a more significant comfort zone in abstract and lateral thinking.

It includes the ability to “think outside of the box.”

Think of that person who’s always ordering the most exotic things on the menu, going to different places, and having interests you would never have thought of. That is someone who has a high openness trait.

People who are high in this trait tend to be more adventurous and creative. People low in this trait are often more traditional and may struggle with abstract thinking.

Conscientiousness tends to display self-discipline, act dutifully, and strive for achievement against measures or outside expectations. It is related to how people control, regulate, and direct their impulses.

A person with high conscientiousness is perceived to be stubborn and focused. Those who have high scores on conscientiousness are usually people who do not go without plans. They prefer a reliable method rather than spontaneous behaviors.

The Planner Among Five Personality Traits

The best example of a person with this personality trait is when someone you know likes to plan ahead of time the next time you meet. They also keep in contact and check on your wellbeing. People with this trait often want to organize their dates and events. They are also focused on you when you do meet them in person.

On the other hand, those with low conscientiousness are associated with flexibility and spontaneity but can also appear sloppy and lack reliability.

People low in conscientiousness tend to dislike structure and schedules, procrastinate on essential tasks and fail to complete tasks.

The average level of conscientiousness rises among young adults and then declines among older adults.

Extraversion is a trait that many people will have come across in their own lives. It’s easily identifiable and widely recognizable as “someone who gets energized in the company of others.” The other traits of a person with extraversion include:

All of which made them recognizable in many social interactions or settings. Have you noticed among your family members that there is always someone who is not afraid to express their feelings? They’re often loud and one who laughs the most audible among others. These people are also social butterflies and have the most friends or groups you know.

Extraversion is characterized by breadth of activities (instead of depth), surgency from external activity/situations, and energy creation from the external environment. The trait is marked by pronounced engagement with the outer world.

The Energetic Among Five Personality Traits

Extraverts enjoy interacting with people and are often perceived as full of energy. They tend to be enthusiastic, action-oriented individuals. They possess high group visibility, like talking and asserting themselves. Extraverted people may appear more dominant in social settings than introverted people in this setting.

Introverts need less stimulation and more time alone than extroverts. But this does not mean that they are unfriendly or antisocial; instead, they are reserved in social situations. Generally, people are a combination of extraversion and introversion.

The agreeableness trait also reflects individual differences in general concern for social harmony. Agreeable individuals value getting along with others. They are generally considerate, kind, generous, trusting and trustworthy, helpful, and willing to compromise their interests with others. Agreeable people also have an optimistic view of human nature.

Disagreeable individuals place self-interest above getting along with others. They are generally unconcerned with others’ well-being and are less likely to extend themselves to others.

Sometimes their skepticism about others’ motives causes them to be suspicious, unfriendly, and uncooperative. Low agreeable personalities are often competitive or challenging individuals who can be argumentative or untrustworthy.

Since agreeableness is a social trait, research shows that this positively correlates with the quality of relationships with their team members. Agreeableness also positively predicts transformational leadership skills.

The Strongest Among Five Personality Traits

In a study conducted on 169 participants in leadership positions in various professions. These individuals were asked to take a personality test and have two evaluations completed by directly supervised subordinates. The results showed that leaders with high levels of agreeableness were most likely considered transformational rather than transactional.

Although the relationship was not strong, it was the strongest of the five personality traits. However, the same study showed no predictive power of leadership effectiveness as evaluated by the leader’s direct supervisor.

Agreeable people tend to find careers in areas where they can help the most. Charity workers, medicine, mental health, and even those who volunteer in soup kitchens and dedicate time to the third sector (social studies) are high in the agreeableness chart.

Neuroticism is characterized by sadness, moodiness, and emotional instability. Often mistaken for anti-social behavior, or worse, a more significant psychological issue, neuroticism is a physical and emotional response to stress and perceived threats in someone’s daily life.

Individuals who exhibit high levels of neuroticism tend to experience mood swings, anxiety, and irritability. Some individuals who share sudden changes in character from a day-to-day perspective could be highly neurotic and respond to high-stress levels in their work and personal lives.

Anxiety, which plays a large part in the makeup of neuroticism, is about an individual’s ability to cope with stress and perceived or actual risk. People who suffer from neuroticism will overthink many situations and find difficulty in relaxing even in their own space.

The Skeptic Among Five Personality Traits

These problems in emotional regulation can diminish the ability of a person scoring high on neuroticism to think, make decisions, and cope effectively with stress. Lacking contentment in one’s life achievements can correlate with high neuroticism scores and increase one’s likelihood of falling into clinical depression.

Individuals with high neuroticism also tend to experience more negative things in life. However, this also changes in response to their positive and negative life experiences.

Of course, those who rank lower on the neurotic level will exhibit a more stable and emotionally resilient attitude to stress and situations. Low neurotic sufferers also rarely feel sad or depressed, taking the time to focus on the present moment and not get involved in mental arithmetic on possible stress-inducing factors.

The Five Personalities Traits and Their Influence

From nature and nurture to age and maturation, the big five personality traits have been widely studied where we can see what influences their impact on a person’s behavior and character.

Personality has often been hypothesized as a question of nurture or nature. One particular study looked at 123 identical twins and 127 pairs of fraternal twins. The results suggested that the heritability for each trait is:

It has also been widely recognized that the older we get, the more our behavior traits will change. We become less neurotic, extraverted, and less open to new experiences as we age. However, our agreeableness and conscientiousness grow as we get older.

The consensus is that men and women are more alike than what normative social science would have us believe. But as the title would suggest, there are some exceptions.

Weinsberg and DeYoung 2011 studied the big five traits and, in particular, Gender Differences in Personality across the Ten Aspects of the Big Five. They concluded that women tend to score higher on Extraversion, Agreeableness, and Neuroticism than men.

Other studies have concluded that while the differences may be present, some traits are not extensively separate. Getting older will tend to align behavior traits such as agreeableness and extraversion, where both genders tend to score lower as time moves on.