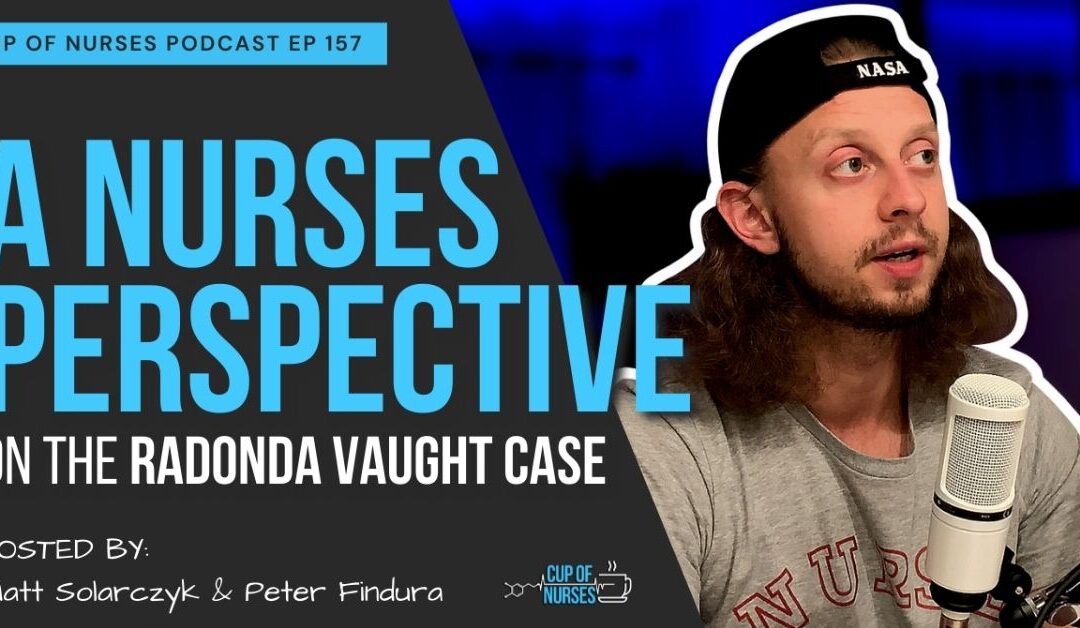 EP 157: A Nurses Perspective on The RaDonda Vaught Case

The RaDonda Vaught case is controversial because of its nature – Vaught being a nurse and how her actions led to the death of a patient. As one of the leading causes of death in the United States after heart disease and cancer, medical errors rank third. But why is this so? What are the common medical errors that can happen to a patient? Is there a future left for Vaught?

In a study done at John Hopkins in 2016, more than 250,000 people in America die of medical errors each year. Other reports indicated that the numbers are as high as 440,000.

Miss RaDonda Vaught was a former nurse from Tennesse. She was accused of dispensing the wrong medicine, which led to the death of her patient. Her trial begins this March 2022. Because of her actions, she was charged with reckless homicide and felony abuse of an impaired adult.

To get a better view of what this case is all about, here is the timeline of events:

Dec. 24, 2017 – Charlene Murphey was a long-time resident of the Nashville suburb of Gallatin. She came to Vanderbilt with a subdural hematoma. A subdural hematoma is also known as bleeding in the brain.

Dec. 26, 2017 – Two days later, Murphey’s condition showed improvement. She was almost ready to be discharged from Vanderbilt. She was then sent to get her final PET in the radiology department of the hospital. Murphey was supposed to be given a sedative called Versed.

Unfortunately, instead of the said sedative, she Murphey was given a dose of vecuronium. This drug is a powerful paralyzing medication. According to federal investigations report, this drug left Murphey brain dead.
Vaught allegedly admitted to hospital staff that she was responsible for the said medical error. She stated that she went to the Pyxis that released medications and realized that the patient’s prescription had not been sent over.
She then overrode the system by typing “ve” and selecting the first medication that came up. The drug she chose was Vecuronium bromide, which is a paralytic.
Murphey was found unresponsive after 30 minutes and required CPR and ventilation. Although she was placed on life support, she died after 12 hours.

Dec. 27, 2017 – Murphey’s family gathers at Vanderbilt to say their goodbyes. She was then disconnected from the breathing machine, calling her time of death around 1 a.m.

Assistant District Attorney Chad Jackson said there is no way to prove that Vaught could have pulled the right medicine from the machine with the way she used it.
Vaught’s attorney, Peter Strianse, said he plans to show that the medicine-dispensing cabinet was in permanent override mode.
A reckless homicide case can carry a sentence of up to 12 years in jail, while impaired adult abuse carries a penalty of up to 15 years.

Updates on the Court Case:

The plaintiff asked the defense counsel not to ask any witnesses. This was about the actions done by Vanderbilt University Medical Center. And the measures are taken by VUMC after the victim’s death.
It is not out of willful neglect, so why should the defense not be able to ask questions? We should look at the whole picture and details.
For one, we are looking at the vacuum problem of the machine. It is like half of the situation was not taken into consideration. As nurses, we need to support her.
The defense counsel couldn’t bring up the patient’s family’s settlement with Vanderbilt University.

Conclusion: Anyone can make mistakes, but medical errors aren’t the result of just one person or party.

How does the nursing profession feel about this?

RaDonda Vaught’s case could have been a mistake that caused her career. It’s crazy that each shift as healthcare professionals could cost us our careers if we don’t pay close attention to detail.
Talk about stressful jobs! This case has sparked a rallying cry for nurses who worry that honest mistakes can be criminalized and they can lose their jobs.
This case also has a few loops that can cause future problems for the hospital. The hospital did not report the fatal medication to the state that caused the error, as required by law.
The two Vanderbilt doctors told the medical examiner that Murphy died a “natural” death. And that her cause of death was an intracerebral hemorrhage. The government regulators didn’t discover this error. Then they got an anonymous complaint ten months later.

Medical errors have a huge cost on healthcare. They cost about $20 billion per year. This leads to more expensive interventions needed to correct or treat more issues.

Despite medical errors affecting so many patients, it is often unreported. In 2017, the NORC at the University of Chicago surveyed medical errors and patients’ experiences with them.
This survey of adults found that in 32% of cases where a patient experienced an error, the health facility informed the person of it. Sixty-seven percent said no one told them.
The CDC fails to classify errors on a death certificate when collecting health statistics to paint the bigger picture. This problem makes it even harder to know accurate data about how often these med errors occur.

Working in a hospital can be chaotic at times. Nurses handle all kinds of responsibilities. From taking care of patients, doctors’ orders, and working with other healthcare workers. Adding up to these are administering different types of medications and operating machines.
These are a few of a nurse’s responsibilities to help provide the best patient care. It can be a stressful environment and nurses are human beings. They cannot do everything with precision and medical errors cannot be avoided. But what are the most common medical mistakes?

The reason why medical errors occur in the hospital:

Think about the most recent time a medical error was made in your care of someone close to you.

Watch the full video on this episode here and learn more about RaDonda Vaught’s case👇👇 :