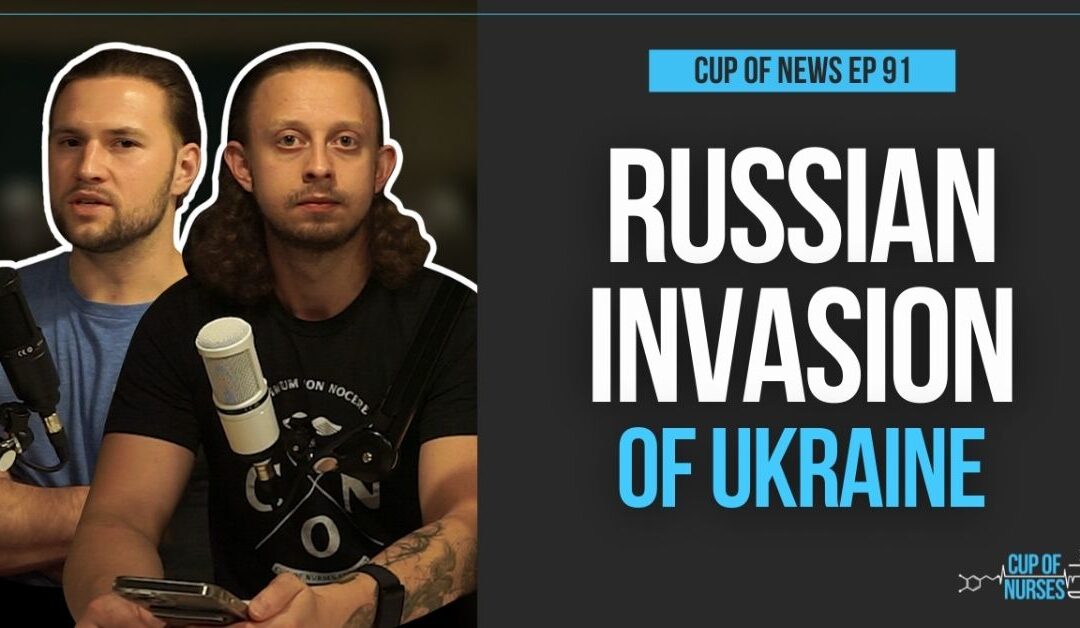 The Russian Invasion of Ukraine

In our latest episode, we will be talking about the Russian invasion of Ukraine and their attempts to seize control over this country.

A Story in History

We all want to know what is the reason behind this attack, so we did a little digging and found out interesting facts regarding Ukraine and Russia’s conflict:

Ukraine is the second-largest country in Europe after Russia. The country also shares boulders with Poland, Slovakia, Hungry, Romania, and Moldova. The government also has a coastline along the Sea of Azov and the Black Sea.

After the Russian Revolution, a Ukrainian national movement for self-determination emerged and was internationally recognized as the Ukrainian People’s Republic on 23 June 1917.

Kyiv is said to be the birthplace of Russia. So naturally, Ukraine’s move toward the Western bloc has made the Russian establishment feel betrayed in the name of having a democratic state.

The national identity and history of Kyiv are more linked to Russia than Turkic states in Central Asia or Baltic states in Eastern Europe.

In addition to that, Moscow’s ruling establishment feels so emotional because the first Russian state was called Kievan Rus, which was established in Kyiv 12 centuries ago.

Even the name of Russia originated in the name of this loose confederation of Eastern Slavic, Baltic and Finnic nations.

Rurik, the founding leader of the Kievan Rus dynasty, has been considered one of the godfathers of the Russian state. Interestingly, Rurik did not have Slavic origins, but he had Viking blood in his veins.

Russia has been aggressive with shifting its borders for the past decade. After the dissolution of the Soviet Union and the breakdown of the KGB, rumors started circulating. The story was that Russia wanted to regain its lost lands, and this began with Crimea in 2014.

Crimean Peninsula became a part of post-Soviet Ukraine in 1991, of which Crimea was a part since 1954. In 2014, Russia annexed the peninsula and established two federal subjects there, the Republic of Crimea and the federal city of Sevastopol.

However, the territories are still internationally recognized as being part of Ukraine. In 2022 Russia again stepped into Ukraine, this time with unknown goals.

Why did Russia attack Ukraine?

There is much speculation about the rationale for Russian President Vladimir Putin to launch an invasion of Ukraine. No one knows what is going on, and it is hard to tell. We live in the age of the internet and the age of information.

The problem with that is that there is so much information that it is hard to tell what is correct and false. We know that the U.S. has been involved in Ukrainian politics for many years now.

Ukraine has an abundance of some of the most valuable resources. The extraction of natural gas in Ukraine accounted for one-third of the Soviet Union’s total output in the early 1960s. Although largely unexploited, the country also has the second-biggest known gas reserves in Europe, apart from Russia’s gas reserves in Asia.

Ironically enough, Ukraine depends on gas imports primarily because the USSR began extracting gas on a large scale in Siberia in the 1970s. Germany is also a big consumer of Russia’s natural gas. The country gets 55 percent of its natural gas from Russia, and the bulk of it goes through Ukraine, which earns a transit fee equivalent to $7 billion.

Much of the gas exploration and production have been transferred to Russia, due to which Ukraine’s resources remain untapped. Presently, Russia supplies 40 percent to 50 percent of Europe’s gas consumption via the Nord Stream 1 pipeline and the Ukrainian network.

Ores such as iron, titanium, and non-metallic raw materials are some of the country’s major exports, iron ore ($3.36 billion), corn ($4.77 billion), semi-finished iron ($2.55 billion), and seed oils ($3.75 billion). Ukraine was the fifth largest exporter of iron ore in the world in 2019, and in the same year, iron ore was the third most-exported product in the country.

Lithium and titanium are some of the precious metals on earth today. The Dobra and Donetsk mines were up for grabs, and there has been cut-throat competition between Chinese Chengxin Lithium and Australia-listed European Lithium. Both the companies want a foothold in the European lithium industry. Some estimates indicate that up to 20 percent of the world’s titanium reserves are situated in Ukraine [1].

Fear of Ukraine Entering NATO and the E.U.

Relations between Ukraine and the North Atlantic Treaty Organization (NATO) started in 1992. Ukraine applied to begin a NATO Membership Action Plan (MAP) in 2008. However, plans for NATO membership were shelved by the country following the 2010 presidential election, where Viktor Yanukovych won. He preferred to keep the country non-aligned with NATO.

Following the Russian military invasion in Ukraine and parliamentary elections in October 2014, the new government prioritized joining NATO. ​​According to polls conducted between 2005 and 2013, Ukrainian public support for NATO membership remained low. However, since the Russo-Ukrainian War and Annexation of Crimea, public support for Ukrainian membership in NATO has risen dramatically.

Since June 2014, polls showed that about 50% of those asked supported Ukrainian NATO membership. Some 69% of Ukrainians want to join NATO. According to a June 2017 poll by the Democratic Initiatives Foundation, it was compared to 28% support in 2012 when Yanukovych was in power.

President Putin has made clear that he sees the country’s aspirations to join the group as a threat to Russia’s borders and its sphere of influence. “Ukraine is an inalienable part of our history, culture, and spiritual space. These are our comrades, those dear to us – not only colleagues, friends, and people who once served together but also relatives, people bound by blood, by family ties.” [2].

Putin’s speech from 2/24/2022 mentions how NATO has broken treaties and international law, instead emphasizing the circumstances they interpret as they think necessary. One reference is the NATO bombing of Yugoslavia, and the airstrikes lasted from 24 March 1999 to 10 June 1999.

NATO’s intervention was prompted by Yugoslavia’s bloodshed and ethnic cleansing of Albanians, which drove them into neighboring countries and had the potential to destabilize the region. Then he mentions Iraq, Lybia & Syria. The illegal use of military power against Libya and the distortion of all the U.N. Security Council decisions on Libya.

Syria is another example of the combat operations conducted by the western coalition in that country without the Syrian government’s approval. He quoted, “In many regions where the United States brought its law and order, this created bloody, non-healing wounds and the curse and international terrorism and extremism.”

The U.S. Sanctions that they gave to Russia

U.S. President Joe Biden announced sanctions on VEB bank and Russia’s military bank, referring to Promsvyazbank, which does defense deals. The Treasury Department said, “All assets under U.S. jurisdiction will be immediately frozen, and U.S. individuals and entities are prohibited from doing business.”

One of the harshest measures would be to disconnect the Russian financial system from SWIFT, which handles international monetary transfers and is used by more than 11,000 financial institutions in over 200 countries.

America and the E.U. already have sanctions on Russia’s energy and defense sectors, with state-owned gas company Gazprom, its oil arm Gazpromneft and oil producers Lukoil, Rosneft, and Surgutneftegaz facing various types of curbs on exports/imports and debt-raising.

The White House has told the U.S. chip industry to be ready for new restrictions on exports to Russia if Moscow attacks Ukraine, including potentially blocking Russia’s access to global electronics supplies [3].

Final Thoughts on This Russian Invasion

We don’t want another world war to erupt at this point. The ongoing crisis has left many of us on the edge of our seats. Hopefully, it can still be resolved so that we can all live in peace.

And if you want to watch the full episode on this, click here for more:

00:00 Intro
00:41 Plugs
01:54 Episode Beginning
06:04 About Ukraine
09:54 Is the birthplace of the Russian Empire in Ukraine?
12:57 When did Russian aggression start?
13:58 Possible reasons why Russia attacked Ukraine
16:39 Ukraine has a lot of natural resources
19:32 Russia’s fears of Ukraine entering NATO and the EU
25:52The Hypocrisy of the West
29:54 The sanctions only affect innocent citizens
36:00 The Financial Sanctions
39:44 Cryptocurrency dragged into war. Is it good or bad?
43:20 The dangers of the government abusing its authority
47:42 Wrapping up the episode